- July 03, 2015
The terribleminds Flash Fiction Challengefor June 27, 2015, was to randomly choose a song and use the title as the title for a story. The story didn’t have to be inspired by the song and we had 1,000 words to play with. I googled as suggested and discovered Mega Ran’s song titled Splash Woman, so I started from there. The story was started on June 29, 2015, and completed on July 2, 2015. We had until noon on July 3 to complete it.

Popular posts from this blog

So, this little guy nearly bought it when I caught it eating the still-forming buds on my Robyn grevillea, but then I thought I might like to see which particular butterfly was responsible, so I took some pictures and decided to keep an eye on it, so I knew when it pupated. The first shot - caterpillar happily nibbling on flower buds:  Yup - definitely nibbling: And here's another view. Note the little yellow lumps near its back end. Same day, but it was one of those cloudy days with variegated light. And it kept nibbling for quite some time: Stretching out to get the more tasty tidbits, and using its hind feet to keep a firm grip on the branch. Eventually it looped back on itself... ...and headed into denser foliage. It didn't always move in a straight line... How come caterpillars have more feet than butterflies? Eventually, it got into some much thicker growth (well, for a young grevillea, anyway), meaning it was somewhat prot
Read more

So, this 1-inch/3-centimetre long spider was sitting on my kitchen wall - probably trying to get out of the rain. It's not deadly, with a bite that can cause mild local pain, redness and swelling. I've also seen it called a 'bug-mimicking swift spider', 'wasp-mimicking spider', and 'tribal mask spider'. When they move, they're rather difficult to photograph. Sites used to find out what spider this was include: http://www.sciencentre.qm.qld.gov.au/Find+out+about/Animals+of+Queensland/Spiders/Modern+Spiders+Infraorder+Araneomorphae/Swift+Spiders#.U0DYt1fis08 http://www.brisbaneinsects.com/brisbane_spiders/SpidersFieldGuide.htm https://www.projectnoah.org/spottings/16163582 http://australian-insects.com/swift-ground-spider.php http://calamvalecreek.awardspace.com/swifty.html
Read more 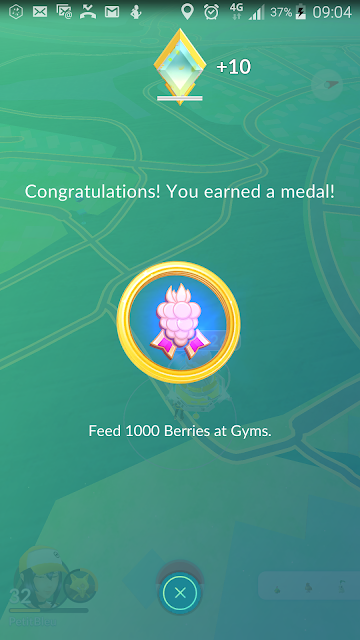 Another relatively easy one to earn, but it takes time. Main tip? Feed Them All. Well, okay, it's a bit more like this: Only the berries you feed to a pokemon in a gym count. You can only feed berries to pokemon in a gym that belongs to your team. You can feed up to a maximum of 10 berries to each pokemon. You can feed any pokemon that belongs to a team member, as well as your own. You can feed your team's pokemon from home, as long as you have a pokemon in the same gym - as last week's post showed. It's interesting, but really annoying if you accidentally feed a golden razzberry to a pokemon in a gym... just sayin'. Sometimes, not having a berry on hand to help catch a pokemon is also annoying - especially when you've just fed all yours to your team's pokemon - so think about that before you go all out stuffing their faces; the medal is pretty, but catching stuff is cool, too. Also, pokemon are little piggies when it comes to berries. And that&
Read more